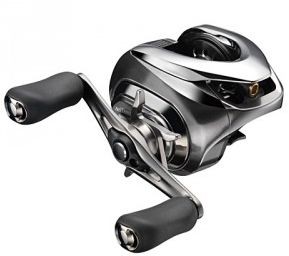 Shimano’s digitally controlled and electronically braked reels are not available in the United States. But thanks to eBay, we were able to get one shipped to us from Japan. And we are so thankful that we did.

This is something truly awesome. Revolutionary. Never been experienced before. We didn’t know what we were getting into, but this is truly addicting.

Hearing the spool spin and charge up the capacitor for it to be able to then apply the digital brakes is incredibly awesome. Absolutely unbelievable in fact. There is one single control dial. It allows you to set how free or how tight the braking will be. We leave it in the middle but a few clicks toward free. It works incredibly well.

Open the door and set it to the kind of line you are using. FL is for fluorocarbon, NM is for nylon monofilament, and PE is for braid, X is for extremely long cast. We haven’t gotten to test that setting yet. Since we use exclusively braid, we leave it on PE mode. That’s it! That’s all you have to set up on the inside. Just chose your line and go. Everything else can be adjust from the single outer dial. There isn’t a traditional spool tension knob. Just the brakes from tight to free.

We have been using this every chance we get for the past 5 months. We are dumbfounded by how easy this makes casting. You almost never backlash unless you are really trying to.

We have handed this to 6 and 8 year old children, and they cast it just fine without any issues. Backlashes are almost a thing of the past.

The one way to make it backlash is to press the button and let your lure drop to the ground. When the lure hits the ground and stops, the spool keep spinning. The electronic system is unaware of what happened and doesn’t apply brakes. That’s it. That’s how we got our worst backlash. We aren’t saying backlashes are gone forever, but they are reduced by about 70%. But that is one way to cause one. If you are pretty good at using baitcasters, a 70% reduction means you’ll never have a backlash again.

It has a very shiny silver metallic finish, which we really don’t like. Too many fingerprint and smudge marks. We prefer matte black finishes. But it does look very sharp and well made.

Another issue, is the space between the two knobs on the handle is not spaced out enough. We keep hitting our knuckles on the unused handle as we reel. Maybe the spacing is good for small Japanese hands, but not ours.

The gear ratio is a 5.6:1, so not as high as other reels, but not low either. So you can use it effectively for slow crawling baits without issues as well as burning most of them back to you. We had no issues burning baits back to us. Of course, it’s not as fast as our Quantum Smoke Speed Freaks, but it’s more than enough.

We’ve been using it mainly in warmer climates in the Midwest, but likely will keep testing it into fall to see how the electronic hold up in the cold.

Update: The past few weeks we have been using it in temperatures as low as 40-50 degrees without issues.

The price fluctuates slightly depending on exchange rates between the dollar and yen. Is it worth the $650 that it will cost you? Probably not. The ergonomics and looks alone make it harder to use. You get the same functionality out of a Quantum Smoke. If you have been a baitcasting user for years, its easy to set the brakes properly and not backlash. The electronic braking is not necessary, but it’s fun.

The electronic braking, did allow us cast further and be more aggressive with our casts. We didn’t cut our casts short from fear of backlash. We were very aggressive and were able to get an extra 10-15 yards out of our casts.

Overall, it’s very revolutionary and that electronic sound is very addicting. But, it’s not necessary and falls short in a few areas. The spacing of the handle, the shiny finish, and the low gear ratio all leave much to be desired.

If you want a pretty cool reel and have money to burn, feel free to order one from Japan off eBay. If you want a more functional, more practical reel that works just as well, take a look at Quantum’s Smoke Speed Freaks.

We really enjoyed our time with the reel and it was very hard to put down. Our staff was fighting over who gets to use the DC Antares 16. It’s pretty awesome!

Over 40 years of fishing experience! Began as a young boy at age 10, and slowly grew deeper and deeper into this hobby! Have been a writer and technology reviewer since 1990.